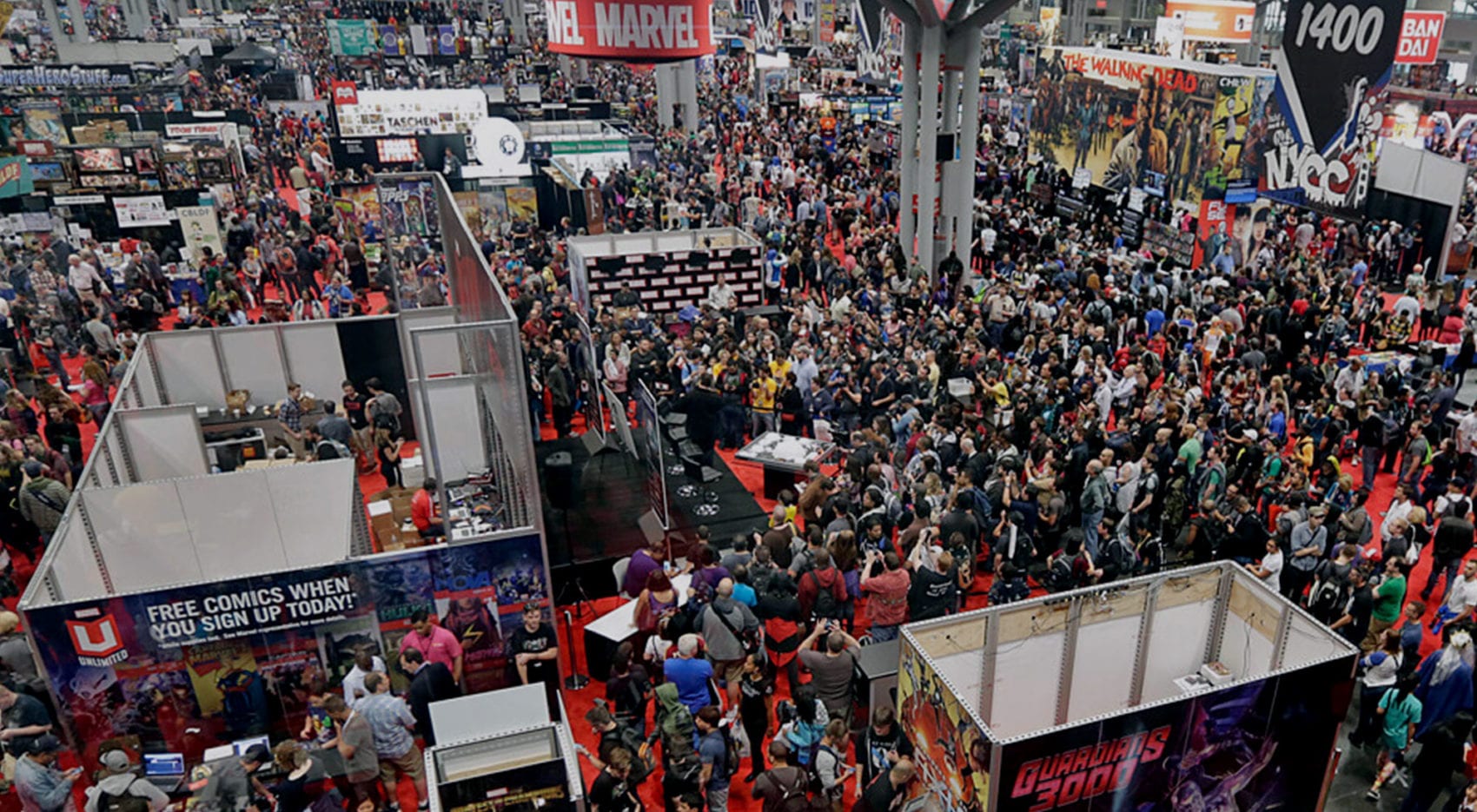 Are you operating in the comics industry and have products to show off to passionate fans? Then join in the festivities at Comic Con where you’ll get face to face with a horde of potential buyers for your products. The flood of enthusiastic visitors will see a wide variety of exhibitors, and you’ll have a chance to brand your company at one of the hottest events of the year. To be successful you’ll need to come with a professional trade show booth setup that will draw in the crowds. Comic Con fans expect creativity and bright colors at trade show booths. Evo Exhibits can give a helping hand with all aspects of the trade show process. Their expertise and experience is unmatched in this area, which means you’ll be safe in their hands.

Comic Con is a non-profit organization that has the mission to increase awareness of the comic art form and celebrate its history. The group was formed in 1970 and the first convention took place in South California. In recent years there has been an explosion in the popularity of comic based movies, which means you can expect these to be heavily featured at Comic Con. During the last few years, around 130,000 attendees have come to join in the festivities, which goes to show how popular Comic Con has become. The event always features special guests that fans get excited about and that add to the atmosphere of the occasion.

Just like other trade show exhibits for comic con, this event will be attended by fans of all things comics. Some attendees will be interested in all of what’s on offer, while others are looking for specific comic book products they are fans of. These attendees know their stuff and love to show support for the industry. Therefore, come equipped with the right merchandise and you’ll sell many units of your products. The media will also be covering the event which can help increase exposure for your company. Impress the members of the media and get free advertising that might go viral around the internet. The opportunities to increase brand awareness with the aid of these attendees is priceless.

To create awareness and generate sales that could elevate the status of their company, exhibitors with products to offer comic fans should come to Comic Con. Serious buyers will be attending that are ready to place orders. Play your cards right and you’ll generate loyal customers that may prove to be lucrative for many years to come. Exhibitors offering something new should also attend as fans of comics want to see new products. A large portion of the crowd go every year, which means they’ll be less impressed with things they have already come across before. Every year the comics industry is making strides and Comic Con is an event where that is showcased. Keep this in mind as an exhibitor and you’ll bring the right attitude to the event. Furthermore, companies interested in networking with strategic business partners purchase space at Comic Con. There is a wide array of exhibitors at the event, which means you may find one that complements your products and a mutually beneficial relationship can be forged.

The process of setting up your trade show booth can be overwhelming if you’ve never done it before, but Evo Exhibits can assist with any issue you might have. They are professionals that have the experience to deal with any challenges. Evo Exhibits can also handle the logistics before and after Comic Con.

Comic Con will be held in San Diego at the San Diego Convention Center, July 18-21 2019. The range of festivities planned is enormous. As an exhibitor you can take advantage of the fun while generating business for your company. A number of notable guest speakers will be attending, which include:

Opting to be one of the trade show exhibits for Comic Con may prove to be a fruitful decision that generates income for your company, helps acquire new business relationships and increases brand awareness within your industry. You also get to take advantage of the festivities and mingle with like-minded fans of the comics industry. Setting up a professional looking trade show booth is your best chance to succeed. Evo Exhibits is one of the premier companies that can help with all aspects of the trade show experience. With the odds of success on your side, visit Comic Con for a memorable and profitable experience.

Lets make something awesome together.

Our comprehensive online tool allows you to manage your exhibit assets online, 24 hours a day, 7 days a week. This cloud-based system gives your entire team the ability to centrally coordinate all exhibits and events while closely managing costs.